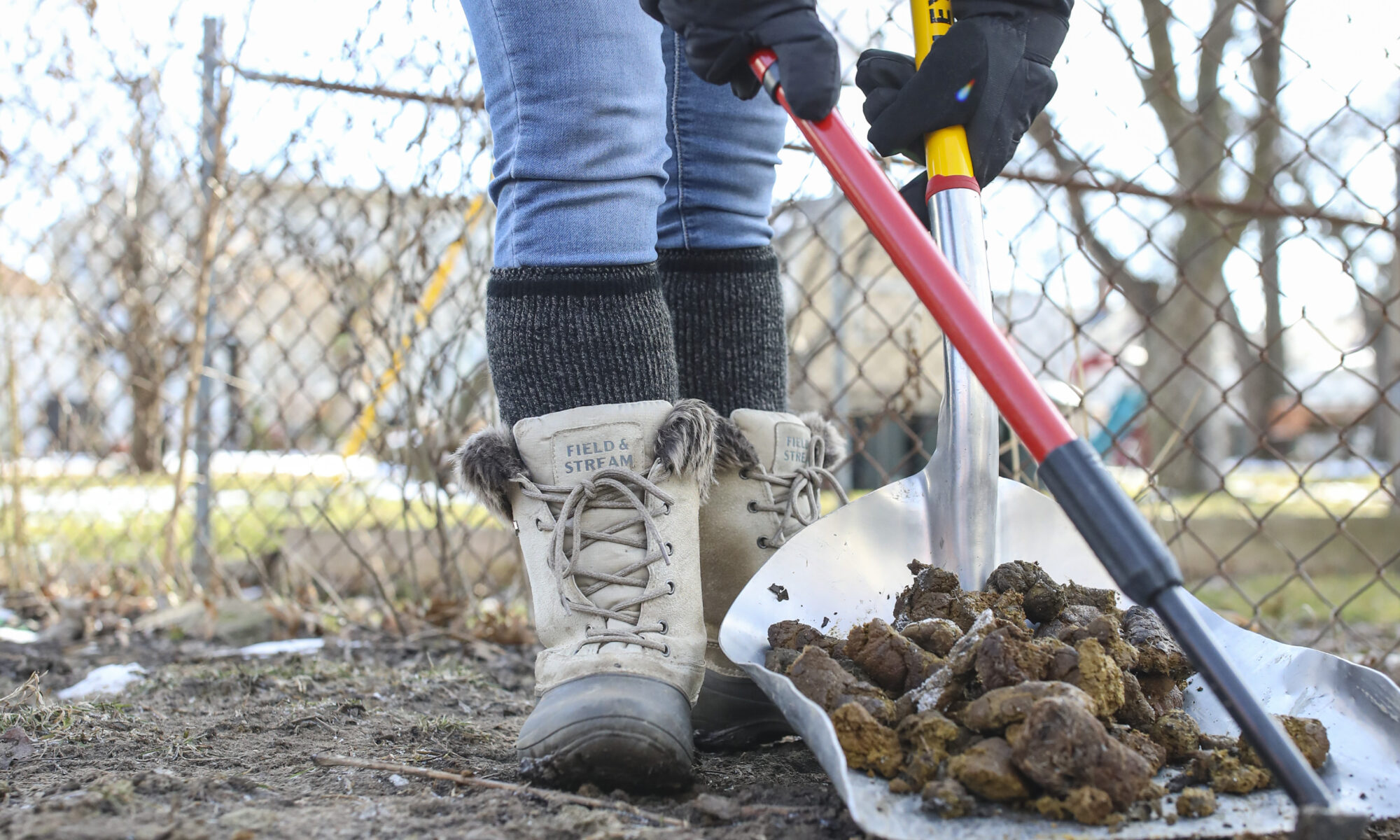 We are only about five months late…. but we wanted to get this post out anyway.

In April we were hoping to write about the amazing pooper scoopers we have out there that are taking the brunt of the task of taking care of our doggos poop…… but before we could get this out…. we had uh, what? Covid -19? Well, sh***

The first week of April is an Ode to Pooper Scoopers and is officially International Pooper Scoopers Week. We dropped the ball, or, er bag of poop on this one. So, we are here now…. showing some appreciation.

I will say, I know it has been a very crappy year likely for all of us, not just for our scoopers…. but I’m an optimist and always believe in making the best of everything. It will get better. I believe it will….

Well, Cristina does too. Cristina McKay is the owner/operator of Puppy Poo Patrol. Her business truly does its best at taking the Sh** out of your life. Literally.

If anyone can make scooping poop look hot, it is her. She is seriously legit. Before the Michigan Executive Order 2020-21 took place, I was able to follow Puppy Poo Patrol for a day on the job and see how they operate.

I’ve always known there are services and businesses that assist in picking up pet waste in residential yards, but I had no idea the detail that goes into the various aspects of the job. So much to think about.

When I showed up to shadow Cristina for a day on her job, I was prepared for the bucket and the poop and the picking up… but I had no idea how important it was to clean equipment between jobs and the idea to consider how you have to dispose of this waste as well.

After every yard, she wraps up every bag of waste and secures it then proceeds to hose down all her equipment with a bleach solution. This is so important for so many reasons. Did you know that worms can spread from yard to yard on soil or pet waste? In the off chance one of her client’s dogs had some kind of parasite or worm….. she has the potential to transfer that from one yard to another if she didn’t clean her equipment. She makes sure this doesn’t happen. Aside from parasites, there are other fecal spread diseases like giardia, parvovirus, campylobacter, salmonella, cryptosporidium. This stuff is nasty business. If she weren’t thoroughly cleaning her equipment like she does, contaminants could be spread around very quickly where other dogs can pick it up! I trust her process to keep it clean though.

You all know your dogs eat anything and everything in the yard?!?! If something was carried to a yard…. there is the potential for spread. Cristina is doing her best to make sure she isn’t aiding in the transfer of parasites. This is so much work! I am so impressed with her process and her professionalism. She even follows OSHA/MIOSHA guidelines on labeling for her bleach container. She has all her bases covered.

She even makes sure she secures the yards and takes photos of the latch on the fences to keep her clients at ease that she secured the area for safety for their pooch.

So, obviously I can’t say enough good things about her…. but don’t take my word for it. Puppy Poo Patrol was recently nominated in the “other” category for Click on Detroit, Vote for the Best PETS. WDIV Channel 4 does a great job at highlighting local business and does an especially great job at focusing on pet businesses.

Puppy Poo Patrol won 5th place. I think this is a little misleading though. She was actually 1st place in pooper scoopers as she was up against dog rescues, crematory services and photographers (yes, me) as well. If Puppy Poo Patrol has enough people standing by her to vote her that high in the polls, well…. she must be good.

So, my fellow pet loving friends…. tip your hat to this woman. She is amazing and does an incredibly professional job. If you would like more information about her services… visit the Puppy Poo Patrol website.